Ottó Szabó is not just another young Hungarian artist simply trying to prolong his childhood years in the studio. He is hard as nails and mischievous, someone trying to teach exhibition visitors to play.

His statuettes are undeniably exciting, but Szabó stirs further interest with a particular private mythology built around his works. His fake narrative about his hijab decorated with folk-art motifs from the Kalocsa region balances bluff and credible, sensational news with unabashed confidence. According to Szabó’s mock-historical account, these communities fertilized local folk art: the typical Muslim hijab, covering the face of Muslim women, became fashionable headgear among young Hungarian women as well, who naturally decorated it with typical Kalocsa colorful tulip embroidery. Szabó claims he has also “found” one of these textiles. Actually, Szabó simply took his grandmother’s Kalocsa embroidered tablecloth from under her TV set, and cut holes for the eyes, passing off this mutilated piece of family heritage as a hijab. 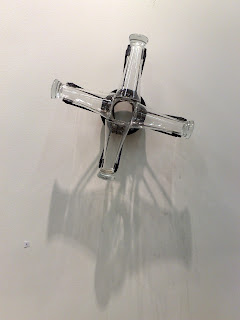 Szabó also claims that he started drawing robots (and later making them) because he did not have action figures when he was a child. His robots, inspired by the computer game Neverhood, have large bodies, small heads, and long, thin limbs, sometimes with club-like ends. They look clumsy, but neither distorted, nor scary. Except for The Mouth of Truth, these sculptures, made of rusty, sharp tools, cannot frighten the spectator, even when they take the form of a skull mask, or when they wield a bloody axe, like The Short-Legged Butcher. These lovingly clumsy, awkwardly moving monsters may be mischievous, but they would surely never cause havoc.

From the two tons of scrap iron Szabó bought at a junkyard he managed to weld a whole universe around himself, a universe with characters such as the Mechanical Deer with a spring for an antler, the Marching Elephant that has a mechanical trunk, the Latin-style El Robo, or BrúszVilisz in a light bulb G-suit. They are all striking variations on a futuristic theme, executed with enthusiastic craftsmanship. In his world of metallic figures, Szabó applies Isaac Asimov’s humane laws of robotics. Technological dependence makes machines chained to, and dependent on, humans – and not vice versa.
Szabó is not the compromising type at all. His experiments prove to be most fruitful in his kinetic works. While Szabó’s cocky robots seem harmless, his carefully executed kinetic works appear completely pointless. His Kitchen Space-Time Bender is a pertinent example of his employment of visual jokes expressed through the language of elementary physics. The intricate interaction of various drums and wheels results in a spinning machine, the function of which is at least as absurd as its name. The kitchen cabinet of Vladimir and Estragon must surely contain such an item.
Ottó Szabó was born in Szekszárd, Hungary in 1989. He lives and works in London.